i’ve been climbing a lot lately. rock climbing that is. which is strange, given that the months of april thru october don’t really provide farmers with a lot of disposable time. and with most of my monday thru friday taken up on the farm, my weekend hours have become these precious little morsels of freedom – freedom from worrying, weeding, planning, and planting – that i must protect at all odds. so driving in a car to some windy summit, then donning a funny-looking harness and uber-tight shoes, has got to be pretty darn appealing if it’s going to take up my whole saturday. but i guess it is, because i find myself heading up there most weekends.

a couple of years ago i went on one of those 10-day meditation retreats. ten days of silence. ten days of deliberate walking, slow-motion in front of the meditation hall, and ten days of sitting, for hours, in the attempt to empty the mind. on the outside, everything looked calm. but my mind was racing. i made up elaborate plots to movies. i had mock arguments with my then-boyfriend. i fell asleep sitting up. i thought about how many minutes, and then how many seconds, until lunch. i thought about all manner of superficial and inconsequential topics. sometimes i thought about nothing, which was nice. i had insights into my habitual patterns of thought, and was able to shift some behaviors that were no longer serving me. that was also nice. and sometimes i felt a deep sense of peace and joy from just being alive enough to watch a deer move slowly through the woods, to hear the creek down below the meditation hall, to sleep deeply and soundly all night, even though it seemed as if i’d done nothing all day.

but i am convinced that rock climbing would have been the buddha’s preferred activity.

i’m surprised it’s not mentioned in the ancient texts. because nowhere else, doing nothing else, do i feel that sort of release from suffering that the buddha talked about. on the rock i am alone. just me and the breeze. my mind empties of thoughts, the farm becomes a distant memory, and all that is in front of me is all that matters. the rock. where to place my foot. the next bolt. the rope. the wind. my own breath. 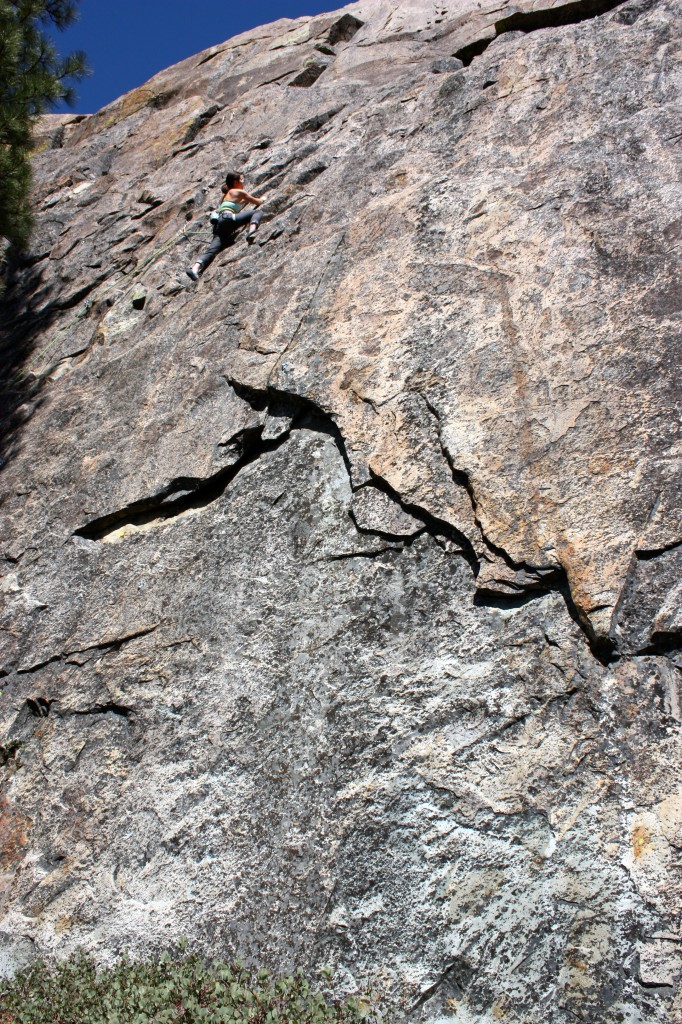 but i’ve got to give the buddha some props. and i don’t mean a rope and a harness, i mean respect. as meditative as it is, i know i can’t be rock climbing all the time, and it’s not realistic to rely exclusively on climbing remote crags in order to get my zen-on. there’s just too much real life that happens off the wall. there are bills to pay, orders to fill, flowers to plant, dinner to make, birthday cards to write, plumbing to fix, pets to pet – all the activities and projects in between those calm, quiet moments where i must remember to breathe. and let go. and relaaaax. i can’t trail around a rope on my waist and expect it to catch me when i fall. i have to have other safety measures. i need to learn to go with the flow as i hoe the never-ending aisles of amaranth. i need to breathe as i plant the salad mix, practice walking deliberately on the farm, and train in the art of trance-like meditative states in order to survive a trip to the local co-op store (the single most socially overwhelming place in our town, second only to the annual county fair).

it’s just that the act of climbing brings a sort of equanimity that feels so rare. but i recognize that it is also one practice among many that makes peace possible. or a little more possible. so does sitting quietly for a few minutes after lunch, watching the western tanagers flashing yellow through the trees. or taking an outdoor bath after work, in the woods, listening to the goats shout and the mosquitos hum and the bumblebees pollinate the wild raspberries. or just drinking a cup of tea in the morning without checking email or watching a youtube video. basically doing anything that inserts a moment of sanity into the insanity of a day.

it is told that the buddha sat under the bodhi tree and attained enlightenment. what the ancient texts must have left out, is that after sitting under this tree, and after his remarkable transformation, the buddha climbed it. he wrapped his hands around those smooth branches and hoisted himself up in the the boughs. he looked at the leaves moving in the breeze, the tigers passing underneath, the ants marching single file up the trunk. he climbed and he meditated and he felt great peace. but he also climbed down. he stepped back into the fray of people and things, and he traveled and taught what he had learned. i’m not sure the buddha had to meditate much after his enlightenment. but i do expect that every few days, or at the very least on his weekends, he’d go for a climb. 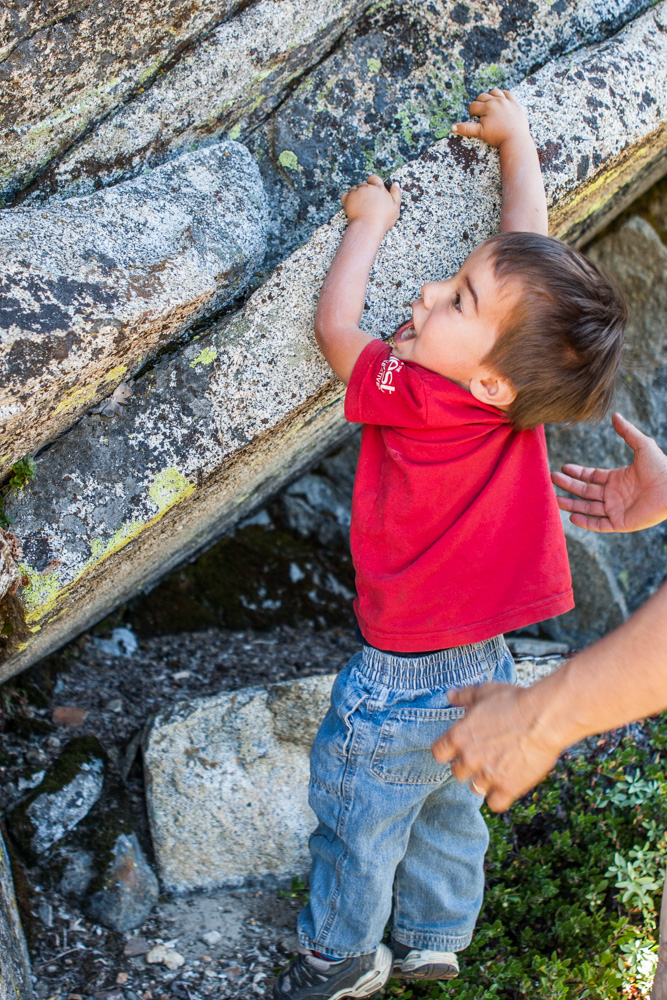 a rare photograph of the buddha climbing 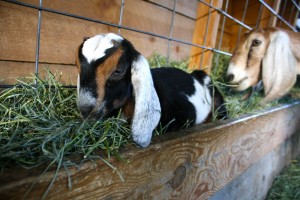 i haven’t been writing lately. i have the regular surplus of seasonal excuses – the greenhouse is full, the irrigation needs to be set up, the salad mix is overdue for a weeding. i come home tired. i wake up groggy. i work all day in between. it’s not as if i am feeling overly stressed, my life feels manageable enough. but i am lacking that creative joie de vivre that only comes for me when i allow myself the space to turn down the static of my life, dip into the depths of my imagination, and write.

this evening i stopped by tim’s barn to hang out with the goats. the late evening sun cut bands of light through the holes in the barn, illuminating swirls of flies and straw-dust, the flick of long ears, the mumble of moms, the constant grinding and chomping of teeth, the little spastic hops of the kids. i’m glad i stopped. to be alone is a beautiful thing, in a barn, the creek running down below, the light filtered just so. to be alone is something i sometimes avoid, for fear of loneliness, for fear of being left out, for fear of suddenly dying, beneath the hooves of seemingly gentle goats, with no one there to hear my last words pronouncing to whom i bequeath julius.

there’s some saying, about how we are never really alone. there are the stars, the bees, spiders spinning webs in the corners of our houses, and bluebirds who throw themselves against our windows. the deer pass by and stare at us with those unblinking eyes. even the wind shares company with us, and the trees too, standing stoic, watching over it all. but it is the lack of human company that can be so upsetting. or depending on the context, very appealing. to not have to talk. to not have to negotiate who’s going to make dinner, who’s going to do the dishes, who’s going to pick up the dog from band practice. to read a book, to write a letter, to make soufflé without worrying that it will sink, because only i am there to watch it rise. there are, in fact, good things that go along with the territory of being alone.

but the difference for me, between an evening alone and a lonely evening, lies in how much i am willing to just be with myself, with whatever feelings arise, whatever thoughts come. so mostly i feel lonely when i am scared to do something bold, something vulnerable, or something creative. any sort of action that requires a premeditated presentation of an aspect of myself, in the artistic sense. write a blog post for example? i’d would much rather have someone entertain me. because then i remain safe, emotions tucked up inside, nary a story of inadequacy nor a tick mark added to my sense of self-worth. “make me happy,” a part of me is saying, “show me something interesting, and poignant, and illuminating about me and everyone i know, about the human condition, about life and death and so on and so forth.” i am resisting looking at these things for myself and by myself. i am turning up the static of my life rather then drop into the unknown waters of the present moment.

so guess what? i’m writing a blog post. maybe you noticed. and it has vaguely to do with goats, but it mostly has to do with allowing myself to write something, anything, and how good it feels to stop the mind’s chatter, the body’s constant need to work the farm, and just say something out loud. you may love it, you may, hate it, but i’m not too worried because i have also added pictures of baby goats. 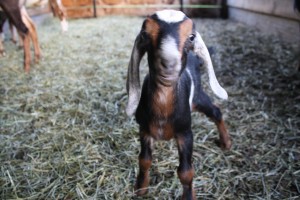 and everyone loves a baby goat.